Three documents exist detailing the history of the church. One of them, the original written history, is in printed form only and we hope in future to make this available electronically. To mark the centenary of the church, a new history was commissioned which was written by Rae Donnelly, well known journalist and member of the church. Links to pdf versions of this history are given below as well as the 1956 supplement to the original written history. Those documents and what follows on this page are copyright to Temple-Anniesland Parish Church and permission to use or reproduce them in any way for anything other than private study should be sought by contacting the church via our contact page.

At the end of the 19th century Anniesland was an area where coal-pits and quarries, blaes bings and brickworks existed side by side with agricultural land. In 1899, at the Cross itself, there was only a smithy standing in an open field, with farmlands to the east. Bearsden Road did not exist. Great Western Road terminated at the Cross – beyond were green fields where cows grazed and bings of red blaes. The open ground now occupied by the church and hall was actually the site of an old quarry.

During the 1890s a number of people migrated from Maryhill to the district. Among them were members of Maryhill United Presbyterian Church [now Gairbraid Church]. Their minister, the Rev William Duncan, encouraged them and others in the area to petition the UP Presbytery for the opening of a preaching station or ‘church extension’ at Anniesland Cross.

In August 1899 a hall had been built [now the Old Hall] at a cost of £1,450 and church services had begun. The newly formed congregation had 47 members. The building was only a few months old when the union took place between the United Presbyterian Church [to which Anniesland Cross belonged] and the Free Church, to form the United Free Church of Scotland.

The first minister of Anniesland Cross Church was the Rev Robert L Browning MA, who was inducted in June 1900 and served for 25 years. In October 58 people joined the church. As the work of the new charge continued to prosper, it became obvious the hall would soon be too small to accommodate the growing membership.

On 4 November 1905 the memorial stone of a new church building, on the stair leading to the north gallery, was laid by John Stephen of Linthouse, a member of the famous Glasgow ship-building family, who was said to be a strong upholder of the United Free Church. Mrs Eliza Stephen deposited a memorial casket in the wall. No records reveal what is in the casket, so there it remains for a future generation to discover!

Thus, in the space of seven short years, the congregation, through their faith, vision and giving, were able to plant a church at Anniesland Cross. Little did they realise how strategic that location would become as the area developed during the next 100 years. 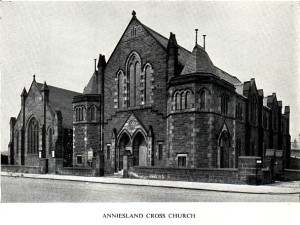 In the care of a succession of Ministers, the congregation of Anniesland Cross Church grew through the difficult periods of the two World Wars and the development of housing and the building of two churches in the adjacent area of Knightswood. By the time of the Jubilee in 1949, during the ministry of Rev Harry Thomson, the congregation had over 800 members.